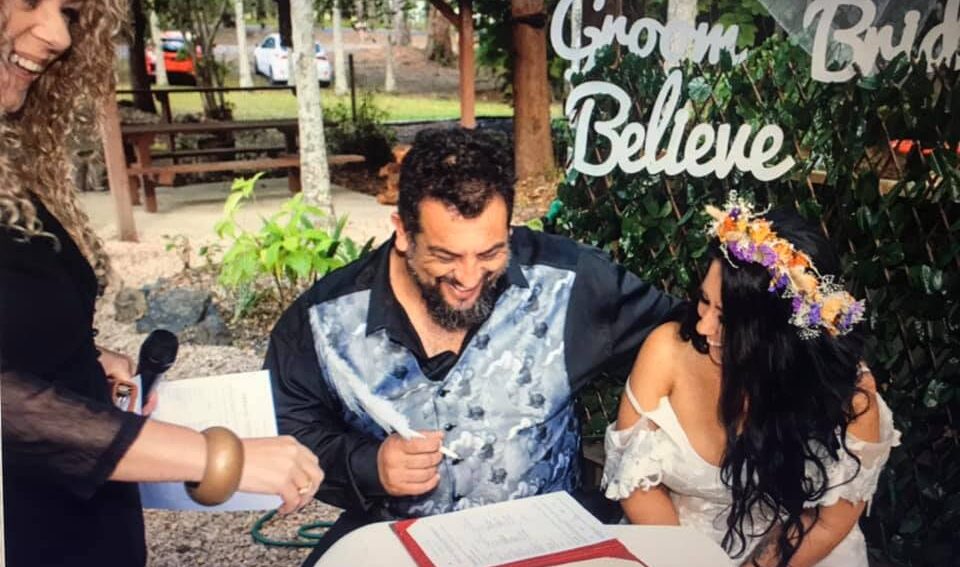 David and Evie: When forces greater than us take charge of your wedding!

I love the way the universe works!  About 6 weeks ago I was at beautiful Secrets on the Lake in Montville  for a wedding ceremony.  I decided to have lunch with my bestie there beforehand and at the end of lunch, I took myself to the loo to get myself ‘wedding ready’ and joined the lineup (typical ladies’ toilet – am I right!?).  Nec minute, this ball of sunshine walked in wearing a tiara and a sash declaring her the ‘bride to be’.  Of course I struck up a conversation with her, and in no time we’re chatting like old friends about her wedding!  I walked away after wishing her the most beautiful and amazing day ever – and I was thinking: “Geez, I should really be marrying this chick” because I recognised my tribe.

Fast forward to the next night, I’m Netflixing and my phone pings – I’ve been tagged in a post on the Sunshine Coast Community Facebook group.  A poor bride was frantic because her wedding was in a fortnight and her celebrant had taken ill and had cancelled.  I checked my diary and read the comments to thank those who’d tagged me, and I commented that yes, I could help … check out my website yada yada.  I didn’t expect too much – usually these sorts of posts get heaps of recommendations for the seemingly 3 million celebrants currently servicing the Sunshine Coast.

And then, my phone pinged again.  It was the stranded bride replying to me : “Oh my God, Lynette, I only just met you yesterday!”

Yes, you guessed it!  She was the bride from Secrets!

Of course, Evie took it as a sign that I was definitely supposed to be her celebrant and I’m so glad she did!   The next day we finalised the booking and the other celebrant who was ill, transferred the paperwork over in a smooth transition.

But there’s a backstory I wasn’t aware of then:  It turns out that back in 2013, Evie and two friends gate crashed one of my Brisbane weddings, sat through the ceremony, drank the champagne, ate the canapes and enjoyed the company of the guests.  They took a few selfies and were off again laughing all the way.   Evie had remembered that ceremony and she’d loved it, but of course she had no idea how to contact me, or even what my name was, when she and David were looking for a celebrant.  Fast forward several years later, a  mutual acquaintance introduced us in Mooloolaba, and then fast forward again to Secrets where she was on a hen’s day wine tour – our paths crossed for the third time (unbeknownst to me).

Evie and David’s ceremony at home was just amazing in every way.   I knew instinctively what they wanted and delivered a relaxed, personalised wedding, bantering with the guests, laughing with the couple and enjoying the whole thing.   The wedding was supposed to be a surprise wedding under the guise of a combined birthday party, but it was soon apparent it was the worst kept secret on the Sunshine Coast.  Having a home ceremony (surprise or not) really is setting the scene for a relaxed and fun affair because it evades the protocols that people expect from a wedding – the crowd were excited and enjoying every part of the ceremony.

Dave, Evie and I caught up again for a post wedding wine and we just couldn’t believe how the universe paved the way to put us together.  I firmly believe that I’m at the weddings I’m supposed to be at, and when I met her at Secrets, I knew I should have been the celebrant.   God, the angels, the unicorns or the fairies – whatever you believe – they had their hands firmly in control of Evie and David’s awesome wedding!

And I’m so glad they did!